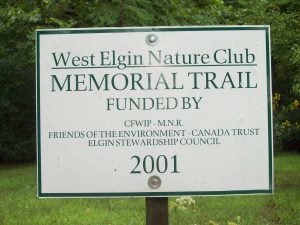 In 1983, the Aldborough Township council appointed the West Elgin Nature Club (W.E.N.C.) to manage a closed landfill site. This area became known as the West Elgin Nature Reserve (also called the Aldborough Memorial Forest by some). The 32-acre (13 hectares) forest is located near the town of West Lorne.  Trees such as Cottonwood and Hackberry are found growing in the preserve in a large abundance. Early spring flowers include red and white trilliums and marsh marigolds in early May. The maidenhair and rattlesnake ferns emerge shortly after the spring flowers finish blooming. Summer and autumn see such plants as turtlehead, tall bellflower and closed gentian start to flower.

A system of trails has been made throughout the forest and is accessible for hiking and birding.

Many trees have been planted in the area near the road as memorials or by those interested in the natural habitat.  These trees have sign posts identifying the tree plus the person’s name.

The municipalities of Dutton Dunwich, West Elgin and Southwold all have representatives on the Elgin Phragmites Working Group.  Phragmites australis remains a large problem in this area.  This non-native reed is rapidly spreading, colonizing wet areas such as open agricultural drains and shorelines. Biodiversity of native plants and animals is significantly reduced once it develops into monoculture cells.  Only the edges of these areas are used by native species while the interior is a dead zone.   Water levels are lowered through high evapotranspiration rates.  For humans, dry phragmites is a fire hazard with a reduction in property values.  Road safety is an issue particularly at corners and railroad crossings.  Agricultural impacts include silting up of roadside ditches and drains as well as blockage of water drainage by fallen stems and leaf matter.

How is it spread?  The seeds and other parts, particularly rhizomes, are spread by wind, water, animal and human movement (i.e. in or on boats, trailers, ATVs and construction equipment) 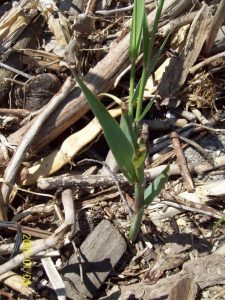 Phragmites shoots found growing on the beach at Port Glasgow in the spring of 2017 were removed by municipal workers. 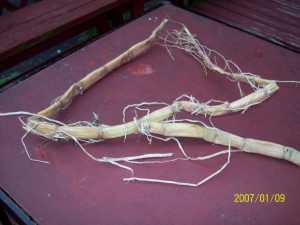 Found along the Lake Erie shore this phragmites rhizome has been washed clean but may still be viable, ready to send out shoots from any of  the intersecting joints. Wave action moves fragments of stolons and rhizomes to infest new areas. 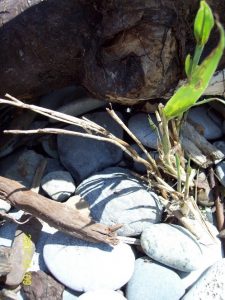 Growing up between rocks, this phragmites shoot found at Tyrconnell on March 28th was later drowned with the highwater level in Lake Erie in 2017. 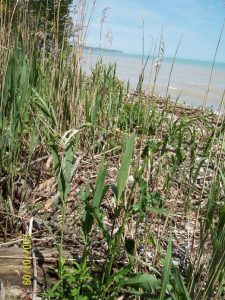 Scenes such as this at locations where streams empty into the lake present a real challenge as in Ontario there is no product licensed to be used near water.

Dead stalks from the previous year create a large biomass, filling up ditches. 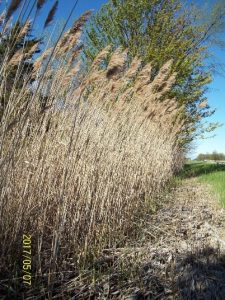 Cutting along the roadsides helps to clear sight lines at corners.  Being that phragmites is a grass, cutting may stimulate growth unless there is continual mowing. However, allowing new shoots to emerge and then use a chemical may be an effective control.

Dutton Dunwich has hired a contractor to assist with roadside removal of phragmites.

A meeting of the Elgin Phragmites Working Group is planned for Thursday, Mar. 1 at 7 p.m. at the Dutton Dunwich council chambers, 199 Currie Rd.   to review progress in local municipalities.  A webinar will be shown followed by a discussion regarding its contents.  This material was distributed by the Great Lakes Phragmites Collaborative.  It is entitled Phragmites Control for Homeowners and Land Stewards.  The presenter is Bob Williams who has been working to control phragmites australis for over 10 years in Michigan.   He shares some very helpful information.

To become involved with the Elgin Phragmites Working Group, you may contact 519-762-2049.